I’m looking at the U.S. music revenue numbers that the RIAA just released for the first half of 2014; at the same time, I’m reading Download: How Digital Destroyed the Record Business

, a 2013 book by the noted UK music journalist Phil Hardy, who tragically passed away in April of this year.  For “numbers guys” like me, the book is a bonanza of information about the major labels’ travails during the transition from CDs to purely digital music. It’s a compendium of zillions of hard facts and opinions delivered with Hardy’s typical dry British wit  — though (like his other books) it would have benefited from a copy editor and, occasionally, fact checker.

One of the statements in Hardy’s book that sits somewhere between fact and opinion is his assertion — as recently as last year! — that the elimination of DRM from music downloads boosted sales.  Sigh… that old question again.

The question of whether DRM-free music download sales helped or hindered the music industry (no doubt it was good for consumers) served as a sort of Rorschach test back in the late 2000s after Apple and Amazon started selling DRM-free downloads — rather like the Rorschach test of Radiohead’s “pay what you wish” experiment in 2011.  If you hated DRM, DRM-free was going to usher in a bright new era of opportunity for everyone; if you liked it, removing DRM was going to spell the end of the music business.

So I thought that with the RIAA revenue statistics database in hand, I could put the old question to rest.  Here is what I found: 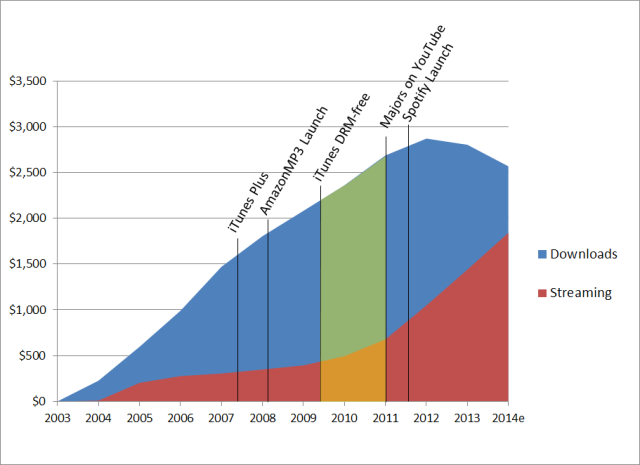 In this chart, “Downloads” includes singles plus albums; “Streaming” includes both paid and ad-supported on-demand services (Spotify, Rhapsody, YouTube, Vevo)* as well as Internet radio (Pandora, iHeartRadio, Slacker, TuneIn Radio), plus satellite radio and a few other odds and ends.  I estimated totals for 2014 by taking the RIAA’s newly released numbers for the first half of this year and applying growth rates from the second half of 2013 to the first half of this year.

The relevant dates are:

Before we get into the analysis, let’s get one thing out of the way: the biggest change in music industry revenues from 2003 onwards was, of course, the dramatic drop in revenues from CDs.  Those numbers aren’t shown here; for one thing, they would dwarf the other numbers.  This is all part of the move from physical products to digital products and services, which has affected both downloads and streaming.

Now let’s look at what happened after 2007.  Growth in download sales began to slow down a bit, while streaming remained fairly flat.  Starting in 2008, growth in paid downloads remained virtually unchanged until the ad-supported on-demand year of 2011.  2008 was a transitional year for DRM, as Apple only offered a small amount of music DRM-free (and at higher prices), while Amazon offered all DRM-free music but had only a single-digit share of the market.  The real post-DRM era for paid downloads started in May 2009.

So, to see what happened after the major labels agreed to sell digital files without DRM, we need to look at the period from May 2009 to the start of 2011, which is highlighted in the chart.  What happened then?  Not much of anything.  Growth in download sales was essentially unchanged from the preceding two years.

So there you have the answer to the old question: removing DRM from music files had little or no effect on download sales.

As a postscript, my 2014 projections included an interesting factoid: vinyl album sales, if current growth rates continue, should reach about $340 million this year.  That takes the resurgence of vinyl from a mildly curious hipster phenomenon to almost 5% of total music revenue.  For comparison purposes, it makes vinyl almost as valuable as ad-supported on-demand streaming (YouTube, Spotify Free, Vevo) and puts it on track to exceed that segment in 2015.  Vinyl could even end up equaling CD revenue sometime around 2016-2017 — for the first time since the late 1980s!

*Paid subscription on-demand services include download features, which use DRM to tie files to users’ devices and make them playable as long as the user pays the subscription fees. But the RIAA reports these as part of “subscription services,” lumping them in with streaming on-demand music.

← Ghosts in the UltraViolet Machine
Adobe’s Latest E-Book Misstep: This Time, It’s Not the DRM →

Brought to you by:

Subscribe to Copyright and Technology in an RSS reader

Bill's Musical Box:
Musings on music, including rediscoveries of rock music from the early-mid 1970s -- music I knew back then but didn't really grow up with. Everyone has to have a music blog, right?

Copyright and Technology is licensed under a Creative Commons Attribution-NonCommercial-NoDerivs 3.0 Unported License.